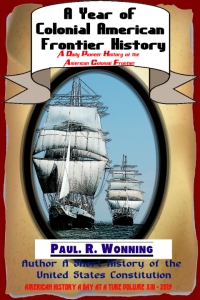 December 13, 1759 - First Music Store in Colonial America Opens in Philadelphia
Michael Hillegas opened what many feel was the first store that sold merchandise devoted to music in Colonial America.
Michael Hillegas (April 22, 1729 – September 29, 1804)
The son of German immigrants Margaret Schiebenstock and George Michael Hillegass, Michael was a native of Philadelphia. His father had been successful merchant in the sugar and iron industries. He became a successful businessman himself, as well as a politician. The Continental Congress appointed him first Treasurer of the United States in 1775. He also edited the Declaration of Independence.

Indiana's history begins many decades before December 11, 1816 when Indiana became a state. The first foundations of Indiana's were laid with the voyages of Christopher Columbus and the settlement that came later. The American History A Day at A Time - 2015 series is in an easy to read "This Day in History," format and includes articles by the author from that series. The reader may read the articles as they appear, or purchase the book:

Swimming
$2.00 daily pool admission per person. $35.00 Swimming Permit good for 25 daily pool admissions. Swimming at beaches is free. $.25 Lockers (where available).
Lifeguards are on duty at all swimming pools.
NOTE: Depending on lifeguard availability, many swimming pools reduce hours of operation in the early and late parts of the season. Contact the property directly for specific hours of operation.
A Swim at Your Own Risk policy is in effect at all beaches except at Indiana Dunes State Park.
Swimming pools and the beaches may close toward the end of the summer season when lifeguards are unavailable.
Pool hours may vary by property. For any up-to-the minute changes, contact the property you plan to visit. Property phone numbers can be found in the Indiana Recreation Guide.
For pool operations, all infants, toddlers or small children who are not "potty trained" shall be required to wea…

Laughery Creek
Laughery Creek is about ninety miles long, beginning in Ripley County. As it exits Ripley County, it forms the boundary of Ohio and Dearborn Counties. Laughery Creek receives its name from Revolutionary War Colonel Archibald Lochry, who died with many of his company along the banks of the creek on August 24, 1781. Laughery Creek drains the majority of Ripley County. Its source is southeast of Napoleon, in the northwest corner of the County, and exits the county near Friendship, in the southeast corner. The Laughery Creek valley serves as the basin for Versailles Lake in Versailles State Park. The Busching Covered Bridge spans Laughery Creek just south of the Park. It is still an active bridge.