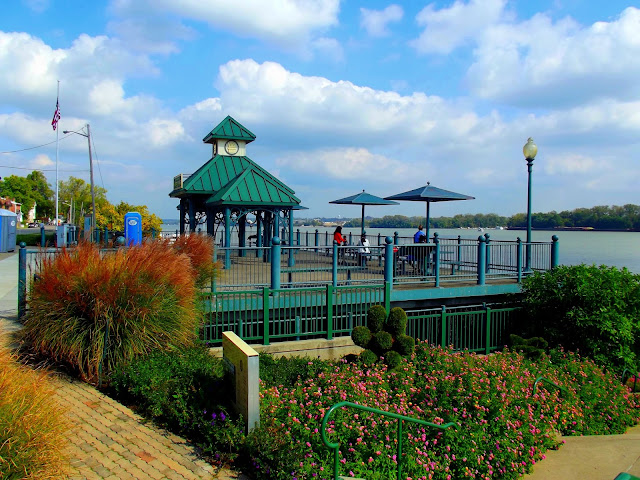 Jeffersonville, Indiana
County - Clark
Jeffersonville serves as the county seat for Jefferson County
Area 13.6 sq mi
Elevation - 446 ft
Population (2008) - 38,100
ZIP codes 47130,47131,and 47199
Area code - 812
A visit to Jeffersonville, Indiana will take you to one of Indiana's oldest cities.
History
Jeffersonville
Jeffersonville, Indiana has its roots in a fort that was constructed in 1786 across the river from Louisville, Kentucky. The fort was called Fort Finney and was located at the site of the Kennedy Bridge. The fort was built to protect the growing white population from depredations by the Indians, which still populated the area. The fort was renamed Fort Steuban in 1787 and maintained as a militia post until near the turn of the century.
Thomas Jefferson
A settlement had grown up around the fort. The name Jeffersonville came into use around 1801 or 1802. The town was platted on June 23, 1802 using a city design grid devised by Thomas Jefferson, and the town took its name from the President.
Civil War
During the American Civil War, Jeffersonville became an important strategic city. Since it is situated directly across from Louisville, Kentucky, it became a staging area for many Union troops going south to fight. The town was serviced by three railroads, and of course, it was directly on the Ohio River.
Boat Building Center
Jeffersonville, Indiana became an important boat-building center, stemming from beginnings in 1819 when the first boat building business located there. Steamboats became a very important product of the shipyards there, especially the Howard Shipyards, established in 1834. The company produced the LST landing vehicles during World War 2 and shipbuilding remains an important industry. The Howard Steamboat Museum is dedicated to the ship building industry in Jeffersonville.
A portion of Jeffersonville's downtown has been registered with the National Register of Historic Places, and the city is working towards restoring and maintaining its historic character. The downtown is populated with popular businesses along the Ohio River Waterfront. Bed and breakfast inns, restaurants, bars, retail stores and public places reside along the River. A visit to Jeffersonville, Indiana would create memories of the place forever.
For shopping, dining and lodging opportunities in Jeffersonville, contact:
Tourism Site for Clark and Floyd Counties

Swimming
$2.00 daily pool admission per person. $35.00 Swimming Permit good for 25 daily pool admissions. Swimming at beaches is free. $.25 Lockers (where available).
Lifeguards are on duty at all swimming pools.
NOTE: Depending on lifeguard availability, many swimming pools reduce hours of operation in the early and late parts of the season. Contact the property directly for specific hours of operation.
A Swim at Your Own Risk policy is in effect at all beaches except at Indiana Dunes State Park.
Swimming pools and the beaches may close toward the end of the summer season when lifeguards are unavailable.
Pool hours may vary by property. For any up-to-the minute changes, contact the property you plan to visit. Property phone numbers can be found in the Indiana Recreation Guide.
For pool operations, all infants, toddlers or small children who are not "potty trained" shall be required to wea…

Laughery Creek
Laughery Creek is about ninety miles long, beginning in Ripley County. As it exits Ripley County, it forms the boundary of Ohio and Dearborn Counties. Laughery Creek receives its name from Revolutionary War Colonel Archibald Lochry, who died with many of his company along the banks of the creek on August 24, 1781. Laughery Creek drains the majority of Ripley County. Its source is southeast of Napoleon, in the northwest corner of the County, and exits the county near Friendship, in the southeast corner. The Laughery Creek valley serves as the basin for Versailles Lake in Versailles State Park. The Busching Covered Bridge spans Laughery Creek just south of the Park. It is still an active bridge.