Clifty Falls State Park
1414 Acres
12 hiking trails which total 12 miles
The map link will take you to another page, you will have to click "back" to return, or bookmark this page first.

Clifty Inn is situated on a bluff overlooking the Ohio River and has 63 rooms. 37 of these have balconies with a veiw of the Ohio River and downtown Madison Indiana. There is also an indoor pool. There are also four suites and banquet and conference rooms. Reservations can be made online. Phone numbers and web site are at the bottom of this page.

Clifty Inn has a restaurant which serves breakfast, lunch and dinner seven days a week. Clifty Falls State Park is located in southern Indiana near the historic river town of Madison. Clifty Falls is one of Indiana's best State Parks. The hiking is superb, the scenery around the park is wonderful, and the campground is great.

Clifty Falls State Park is named for Clifty Falls which tumbles sixty feet into the canyon below. Clifty Falls is visible from an overlook near Clifty Shelter. Clifty Shelter is on the north end of the park. There are three other waterfalls in the park, none of which are visible from the main drive. Little Clifty can be seen after a short hike of about one quarter mile from Clifty Shelter. There are some impressive steps to climb on the way to this falls. Tunnel Falls, so named for its proximity to an old railroad tunnel, is just a short distance from the main drive around the park. Again, there is a stairway to descend down to the trail. The fourth falls is called Hoffman Falls and is accessed by descending another long stair down to the trail it is on.

There are two entrances to Clifty Falls State Park . The North Entrance is accessed from State Road 62. When you pull in this entrance Clifty Shelter is to the right. This is a pretty big shelter, lots of room for picnicking. There is a large field suitable for soccer, badmitton, etc. The south entrance is on State Road 56, which also goes into downtown Madison. Clifty Inn is located to the left of this entrance after you ascend the hill.

Madison is nestled among the hills on the banks of the Ohio River in one of the prettiest settings for a city in our state. With a population of about 12,000, it has a very nicely renovated downtown featuring antique shops, various retail establishments, a few bed and breakfasts, and restaurants. The riverfront boasts the awesome Riverfront Park. Bricked sidewalks with nicely landscaped areas in between, this well designed park are the site of the Madison Regatta. This event features the Unlimited Hydroplane Race and boat races in which speeds of over 200 MPH are attained.

The Ohio River Bridge here crosses into Kentucky via US 421.

State Road 56, east of Madison, goes towards Vevay, Rising Sun, and Lawrenceburg. It is about an hour or so drive to the riverboat casinos in Rising Sun and Lawrenceburg. The highway hugs the river for most of the distance and is a very pretty drive. Along the way, you will pass Markland Locks and Dam, which controls the river level and makes the river consistently navigable for the barges. The locks are on the Kentucky side of the river. They can be accessed over the bridge which spans the river over the dam.

Web Site for the Indiana Department Of Natural Resources:

Back to Jefferson County 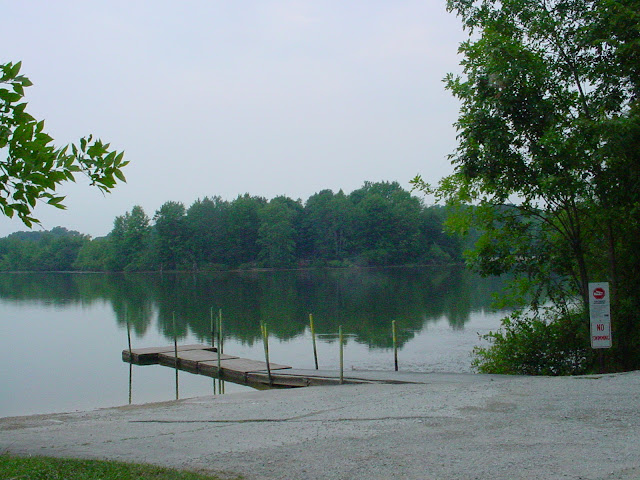 Batesville Fishing, Hiking and Boating Spots There are a number of opportunities for the outdoor activities of boating, fishing and hiking in the Batesville area. Bischoff Reservoir Boat Ramp Exploring Indiana's Historic Sites, Markers & Museums South East Edition Boating is permitted on Bischoff Reservoir. Motor size is limited to six horsepower. This ramp for the 200 acre lake is located on County Road 1400 North. Turn right (South) on Washington Street if coming from Batesville in Morris, Indiana off of Indiana State Road 46. Washington Street intersects County Road 1400 N at a "T". Turn right and the road ends in the lake. There is a boat ramp here. Fishing is permitted, with an Indiana State Fishing License, at Bischoff Reservoir, as well as other public reservoirs. There are several access sites for bank fishing on Bischoff's Lake. Follow County Road 450 E south from County Road 1400 N. There are spots along this road. Turn right on County Roa